..and then it rained.

All my best laid plans to go excavating with the Primary School were cancelled last week as the rain set in. A lot of you must be thinking that as an archaeologist I shouldn't mind digging in all sorts of weather conditions, and I don't (oh the stories I could tell), but I can't expect young children to be out there in it with me and that was the point of going there in the first place. So we've postponed it until this week when the weather *should* be a little better.

That means I've had a week in the office sorting out everything else that I should have been doing over the last few months. I think people have a massive misconception of what happens in an archaeological office; maybe there will be exciting finds lying around, maybe a skeleton here or there, maybe we'll be all gathered round - like in History Cold Case - debating a site we've been working on or an interesting feature we've got, or maybe we're just throwing Anglo-Saxon gold at each other. It doesn't happen (well maybe the skeleton part does) and most offices work like normal offices where people are swearing at computers, stressing about budgets, drinking loads of tea, and moaning about the weather.

Anyway here's a quick round up of my office-based week:

NVQ
Still going through that. I've got my line manager and placement mentor helping me decide what the syllabus points are asking of me. I had a meeting with my NVQ assessor on Monday so I'm putting stuff together as of now to build up my portfolio.


Databasing for the Test Pits
Excavating produces a lot of paperwork. It's a destructive process, we destroy the archaeology by removing it, so detailed records must be kept so the information can be analysed in the office or by someone else at a later date. After finishing the excavation the archaeologist (or someone sat near a computer) puts the information written on the sheets done on site (which it's why it's important these are filled in!) onto a database for ease of access and retrieval. It can be hugely time consuming and data bases vary from unit to unit, but is an important part of the site record so must be done.

It's taken me a couple of days to put the A Town Unearthed stuff on so far. I've never used the system CAT uses and it's taken me a while to get my head round it. The system they use (called the Integrated Archaeological Data Base) is very detailed and you can link up site photos, plans, context sheets OS grid points, finished reports, finds analysis, environmental results etc to the one place so, in theory, if you wanted any information on that site all you had to do was open the file up. It just takes a long time to link everything up, and my computer is slow too so that doesn't help!

Meetings for projects I can't talk about yet
There are a lot of future archaeological projects planned for the Canterbury/Kent area which I will be involved in over the next few months. I'm not allowed to publicise the projects or even really talk about them to anyone because they might not go ahead; a lot of them are dependant on finding funding and we don't want to be getting peoples hopes up on something which may not happen. Anyway, Kent should be a very interesting place to be if you are in to archaeology in the next few years.


Parks for People
I've been to a few meetings on the project, which is still in fairly early stages so I, again, can't really talk about it. There's a website to look at which has information on the project.

The results for our Folkestone skeleton came back
And as suspected there was nothing wrong with the surviving bones. Here's a photo: 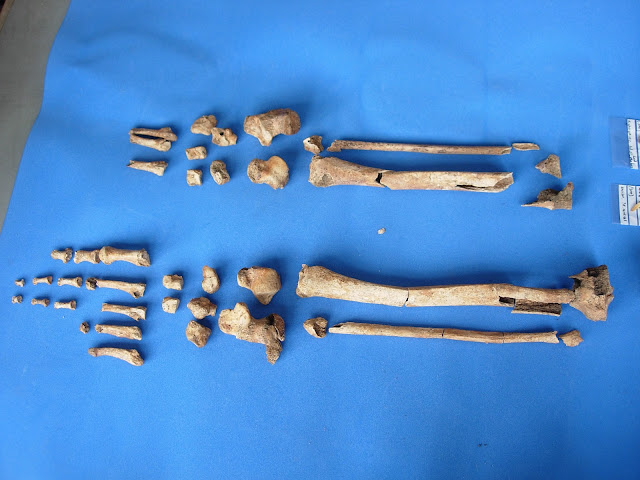 When buried skeletons can have a bit of a rough ride before we find them, if we find them, so to find just a pair of legs is not too uncommon.You may have noticed that some of the toes are missing and, again, this is quite common and does not mean they were missing whilst this person was alive. This can be put down to a (not exhaustive) list of factors; for example, sometimes the small bones are missed by excavators if the soil is particularly sticky or wet, sometimes the bone degrades quicker than the rest of the skeleton, and sometimes burrowing animals or worms can move them around. As for the rest of the body it seems that the rest was indeed removed during an earlier phase of work on the house, which is a shame as not a lot can be deducted about an individual from just a pair of legs; rough age (adult - over 20), pathology (none). Anyway, final conclusive interpretations will follow but I will say the owner of these legs did not have any leg-based injury or disease.

Hopefully the weather gives us a few days of more excavating before the winter properly sets in!