January has been very exciting, especially with all the snow! I have been spending time up in London, firstly back stage at the British Museum and secondly at Westminster, and also preparing my section in the final A Town Unearthed Exhibition which is due to open very shortly.

I spent three days back stage at the British Museum in the middle of January. I had been introduced to Julia Farley, curator of European Iron Age collections, back in December when we took the helmet up to London for the Annual Treasure Report and as I was so excited to be in the British Museum she invited me to pop up and volunteer for a few days. I was very pleased to be able to see behind the scenes and to help out, even if it was only in a small way. I was able to get my hands on the Snettisham Jewellers Hoard as Julia has been working hard at updating the database for all the collections on display, as well as the ones that are buried deep in the museum. I had a tour of the metal conservation area, including a close up view of the Chiseldon Caulderons which was really special, and some other artefact's from all over the museum. All in all I had a marvellous time and would go back in a heartbeat!

I wasn't able to take any pictures inside but here's one of the BM columns in the snow. 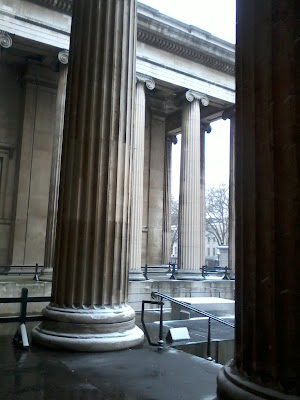 The next week I was up in Westminster. CSI: Sittingbourne was invited to host an exhibition and Andrew Richardson and I went up to represent CAT at the open evening. The exhibition space was very impressive and CSI managed to fit in a small replica of their lab in Sittingbourne so people could have a go at conserving some artefact's. I was in charge of guarding the precious Anglo-Saxon brooches and telling people about their history, as well as promoting the CBA's Community Placement scheme! The exhibition and CSI's work received much praise from the people I spoke to and we've hopefully highlighted public interest in archaeology. Between us I think we managed to get a few MP's to agree that heritage and archaeology are important with at least one saying it was a shame we have been neglected over the recession and that there should be more funding available to support archaeology as a whole. Maybe not world-changing just yet, but we have to start somewhere!


This rubbish photo is of the exhibition as it was set-up in Westminster. I had to take it with my phone as I had left my camera at home over Christmas, but I hope you get the general idea of the magnificent space CSI had. 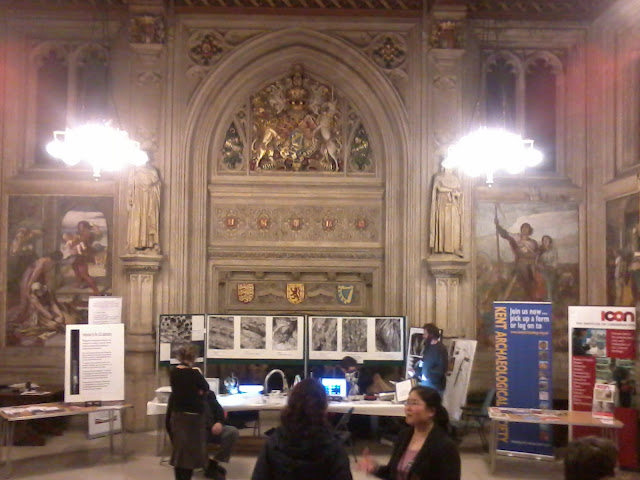 And there concludes my London stint! Next time I will be taking about the A Town Unearthed exhibition. And I've retrieved my camera so the quality of photos should be marginally better!