Disclaimer: This, again, does not reflect the opinions or views held by any company or person that I work for or I am associated with. These are my opinions drawn from my observations and experiences as they stand up to now and are not to be taken as anything other than that. Please do not take offence.


This last week has been a bit slow for me with my blisters and skin peeling trauma. I did make it to Ranscombe Nature Reserve for the Kent County Council excavation, pictures to follow. It's shaping up to be a very interesting place so watch this space.

I was going to dedicate this next post to the benefits of community archaeology to the community and to archaeology but I think that will become more apparent as the year and the blog continues so will leave it for a later date. Instead I'm going to address some of the negative perceptions of this branch of archaeology which, strangely enough, I don't have much hold with. I'm not denying there are no negative aspects to community archaeology, I'm not that naive, but some of the points I've noticed being raised over the last few months have made me wonder what it is that some people think we're doing. I've had these concerns raised by professional archaeologists, by volunteer archaeologists, and by members of the public so they are not limited any one group and don't think that it's limited to people from Canterbury/Kent either, these points have been raised multiple times wherever I've been. The list is not exhaustive but the themes are generally the same.

So here we go. I'll try not to rant too much.

Money shouldn't be spent on community projects, it should go into academic research projects and keeping professionals employed.

I think this is the big one, well at least it's the one I get harassed about the most which is odd because this is one of the only points I can't do anything about. Firstly I'm going to deal with diverting the money to keep professionals employed. I'm sure most of you are aware of the economic downturn of the past few years, well this has resulted in less money being pumped into developments and therefore less need for large-scale commercial excavations ahead of these developments. Work is slow and many of us, me included, have faced and weathered long spells of unemployment in between projects. For those who don't know much about being an archaeologist, life is not easy for most involving moving around to where the work is, sometimes on a weekly basis, and always with the threat of redundancy. I think the point I'm trying to make here is that archaeology as a career, in my mind, has always been unstable and even if the money was diverted to keep us all employed, there isn't nearly enough to go around everyone. And for how long? What would we all do? In any case it'll never happen, at least from the Heritage Lottery Fund. That money was raised by the people who brought lottery tickets and has to be used for community based projects to give back to them what they put in; as it should be.

As for academic projects, well I don't really know a lot about securing funding for those sorts of projects. I will say though why don't you involve the local community into your research and get your funding that way? You'll get some valuable insights into your area of research, some different perspectives and you'll be giving something back to people how are genuinely interested. Just a thought.

The volunteers who work on these projects don't know anything about archaeology, they don't know what they are doing, they don't work hard enough and they are destroying the archaeological record by over digging features and not recording properly.

This is the second most-brought-up grievance against community archaeology and is the one that most gets on my wick. Firstly, as mentioned in a previous post, some of these volunteers have been volunteering on archaeological projects for more years than I've been alive. There are archaeological groups, such as the Dover Archaeological Group, who run self-funded excavations every weekend throughout the year and have been running since the 1970s. They aren't paid, so aren't considered professional, yet they have more experience and knowledge than many of the professional archaeologists that I know. Secondly, with the right supervision over digging and poor recording is not a problem. The level of competence displayed by some professional archaeologists who have been in the job for years can leave a lot to be desired so before judgement is passed on those just starting out in archaeology, take a look at them. And if any professional archaeologist ever says they have never made mistakes while recording or excavating when they were first starting out then they are either lying or are unaware they have made mistakes and are still making them now; refer to my previous point. I'm sorry if it all sounds harsh but some professional archaeologists are too quick to judge my lovely volunteers when they themselves are lacking. As for the volunteers not working hard enough then I'm sorry to say but I'm going to have to disagree with you again. I'll spare you the details but suffice to say I'm yet to go onto a community run site and think that the volunteers are slacking, in fact it's usually the case where you have to work hard to curb the enthusiasm!

Community Archaeology takes jobs away from the professionals.

This is the third most-brought-up-grievance and is linked quite closely to point number 1. In my experience this is not the case. I am not aware of any community dig that has actively usurped the commercial side of archaeology. Community projects do not happen on building sites, they do not happen on developer-led timescales, they do not include watching briefs or evaluations, and they do not involve planning laws. They happen on endangered or forgotten sites where there is little chance of getting alternative funding to investigate them, they employ specialists and supervisors to guide and train the community, they research history which may not be important nationally but is important locally (and after all, who knows what you might find out!), and work at a slower pace which means more time is available for careful excavation and interpretation. More developers are now building communities into their briefs, either through direct involvement or by providing resources for education, but there is a long way to go yet before all archaeology is done by unpaid workers. It's not just the archaeologists working on sites which feel that they are losing their jobs to volunteers; other specialists, such as conservators, are felling usurped by them. The issue here again is funding. When working on the post-excavation side of things the money does sometimes run out and work has to either stop or be funded from an alternative source. It means that, occasionally not all the time, artefact's and samples don't get analysed and have to be put to one side until the money is available. Projects, such as CSI: Sittingbourne, are using volunteers and the Heritage Lottery Fund to work on these artefact's and if they were not doing so now could have resulted in the loss of important information concerning the site. I suppose in a way this is taking the work away from the professionals, but who knows how long it would have taken to raise enough money to continue this work, it could have been months or even years and during that time the artefact's would have continued to degrade. I personally think that work like this should continue; others will disagree.

There will always need to be the commercial archaeologists and other specialists working in the field and there is plenty of room in archaeology for everyone to get involved.

This is true but again one of the points that I don't have any control over (yet). The CBA placements have been predominantly young women but this years intake has included some chaps too. I don't know if the trend is due to the people who applied for the post, the location of the host archaeological units, the way in which these units take on staff, or is part of a bigger picture of employment in archaeology. Whatever it is I agree there is room for improvement, communities are made up of lots of different people and it is only fair they have a chance to be represented. The CBA have announced funding for more placements and have extended the bursaries for at least another two years so maybe this will be the opportunity needed for more people to apply for these posts.

Community Archaeologists and community projects don't contribute anything to furthering the our knowledge or understanding of the past. It is all just a public face and doesn't engage in any real archaeology.

Twaddle. I'll be picking up on this in a later post so I'll save it until then.


I think that covers the more prevalent themes for now. On a lighter note here's a picture of my Aunt and I at the Jubilee Pageant. The boat behind us is the very last one and housed London Symphony Orchestra. 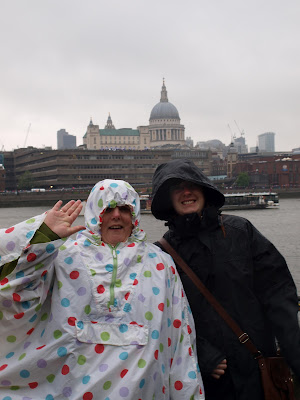