On Monday we went on another trip to the beautiful French town of Boulogne. We were heading over there to supervise the unloading of the Bronze Age British finds which are going into the exhibition, including gold torcs, a bronze hoard, and pottery of the period. Whilst we were there we managed to fit in a tour of the archaeological works happening in the crypt under the Cathedral (I think I wrote we were going under the castle, I got confused over which crypts they meant); so far they have found features stretching back through to the Roman period but more on that below.

Ok we got there amazingly early and managed to squeeze in a quick zip round the Cathedral where we happened upon this (sorry for the blurry photo)...
...which is all about our A Town Unearthed project in Folkestone! The is talk of doing more future cross channel projects between Pas de Calais and Kent as we are very closely linked historically and archaeologically. More pictures of the Cathedral interior: 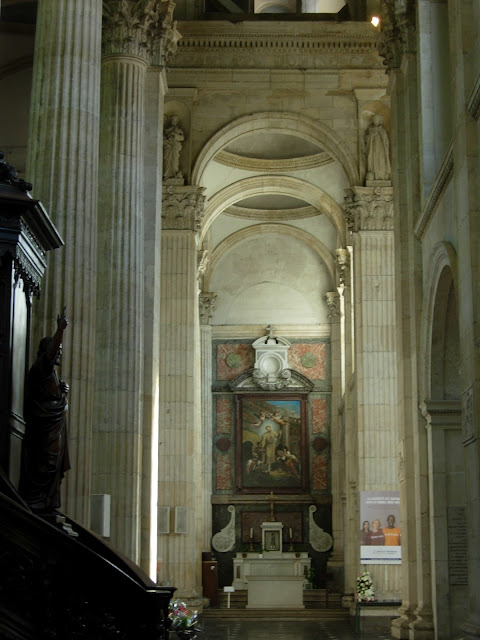 And then we were on to the crypt! There are archaeological works going on down there ahead of work to improve access for the public. In the 19th century the crypts got a re-model and they basically laid the floor straight on top of what was already there; namely the remains of a Roman barracks and a medieval chapel. There are fantastic 19th century wall paintings down there.. 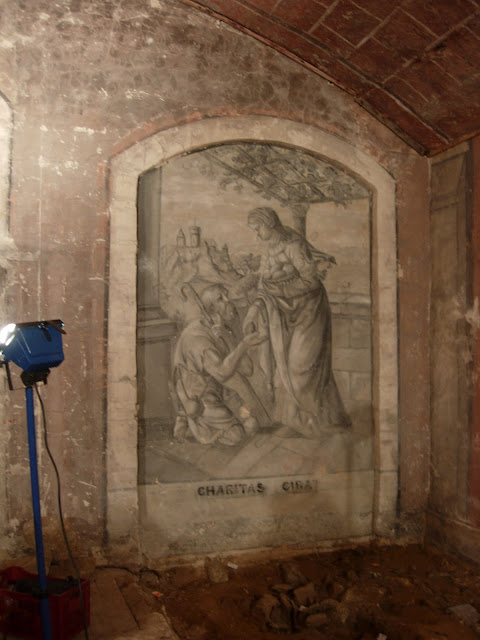 ..and charnel pits from where the medieval chapel was cleared in the 19th century. A charnel pit is what archaeologists call a feature (such as a ditch or pit) which has been filled with skeletons which we not originally laid there; possibly moved due to later phases of grave clearance in graveyards or crypts. The bones in here would have been bones when they went in, there were no actual fresh burials put in these pits; it was just a way of disposing of the earlier burials. Here's a picture of some of the medieval bones in a 19th century pit.. 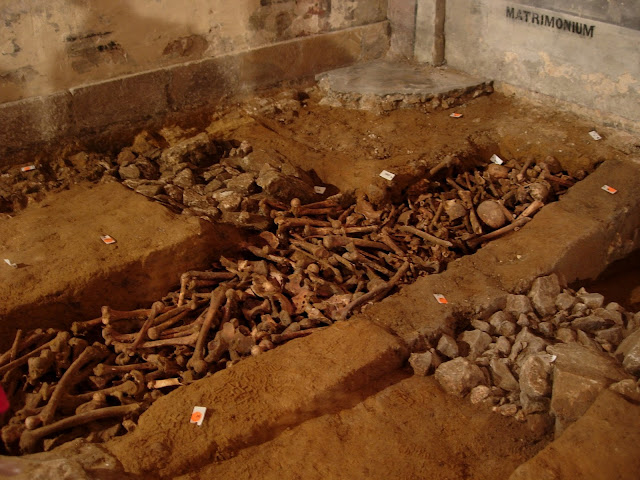 ...there are about 800 individuals here, the ratio of men:women is 14:5, there were no signs of malnutrition but there were signs of diabetes and obesity on the bones and they were mostly adults. These people are thought to be the priests and monks who were interred in the medieval chapel (demolished in the French Revolution in 1773).

I didn't take any pictures of the Roman floor layers but they have found the original earthen floor directly underneath the 19th century one. You can see in the top-middle of the above photo a corner of the 19th century floor and how it was laid directly over the archaeology; these days there would be something in between to protect the archaeology! The old city of Boluogne is built on top of a Roman fort and this fort was the head quarters of the naval fleet which controlled the English Channel; the Classis Britannica. Evidence for this naval fleet appears in Dover, in Folkestone at our Roman Villa site (some of the roof tiles have been stamped with their seal), and in other places along the Kent and French coast. The Cathedral partially on top of the soliders barracks so this excavation is a fantastic opportunity to learn some more about the Roman period in Boulogne.


The boat exhibition is looking fabulous. I have taken some photos but I'm not putting those up until the opening on Friday because I don't want to ruin the surprise. Below is a photo of the entrance to the Chateau Musee which you can see in my previous post, but this time when we went there was a big crab hanging over the top! There are a number of art events happening in Boulogne this summer so this is part of it, again with the nautical theme. 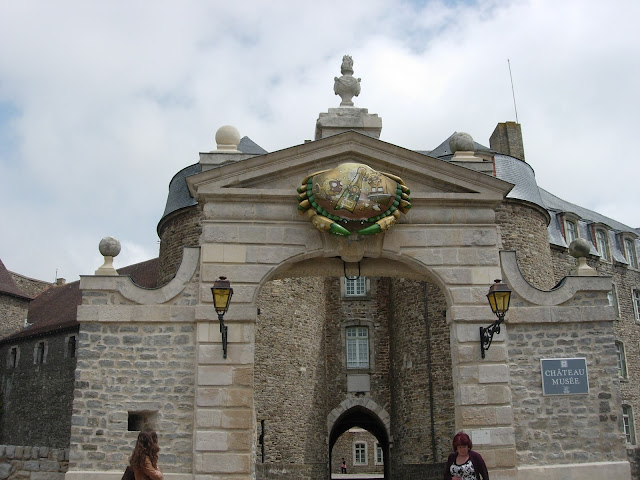 We're heading back over for the exhibition launch on Friday so I'll try and update you all on that over the weekend!