I've just spent the last (extremely hot!) week in Lyminge on the University of Reading excavation (run in conjunction with Canterbury Archaeological Trust and Kent Archaeological Society). There is a blog updated regularly on the finds, features and excavators if you want to read about the details; I'll only be doing a quick run-down below so if you do want more information then you'll find it there.

Excavations in 2008-2010 were undertaken near the church (more on that below) to attempt to understand the changes that occurred during the conversion to Christianity in the Anglo-Saxon period. There is documented evidence for a double monastery (one that has mixed sexes and was presided over by a royal abbess) and the excavations in this first phase successfully located the domestic buildings associated with the monastery (with a date of around the 8th century). Excavations uncovered evidence of the domestic section a pre-Christian (late 5th century - early 7th century) royal complex, or villa regalis. Nothing like this has been found in Kent so these discoveries are re-writing history as we know it!

So that was a whistle-stop tour of the last phase (more information on the website) and now Phase 2 is underway. This new phase, which is set to continue until 2014, is centred around Tayne Field and has already turned up a Saxon hall, set to become one of the largest in the country, a Sunken Feature Building (SFB) - more on that later -, countless Norman cesspits, and a number of later medieval field boundaries too! 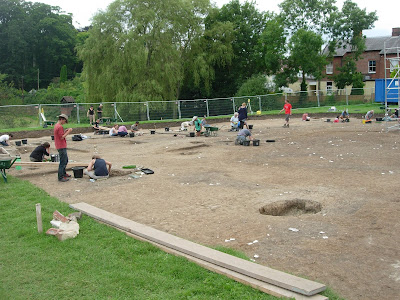 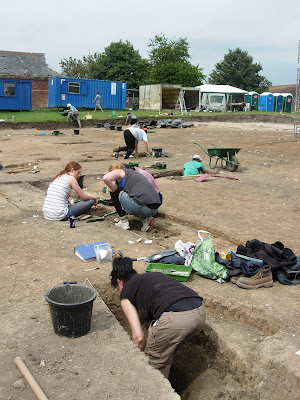 ...as you can see from the photos the trench at Lyminge is a little bit larger than the test pits I've been handling at Folkestone!... 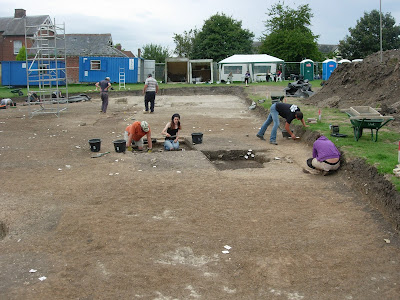 ...this is a view of the SFB (sunken feature building). The commonly held theory - although it's been coming under fire recently - is that these buildings had a sunken bottom and had wooden planks laid above which made up the floor. They are almost always Saxon in date and this one is no exception. Quite often they are associated with a certain purpose, such as weaving or storage, and are back-filled with rubbish when they fall out of use; although some of the 'rubbish' that has been coming out of this SFB has been very impressive indeed!... 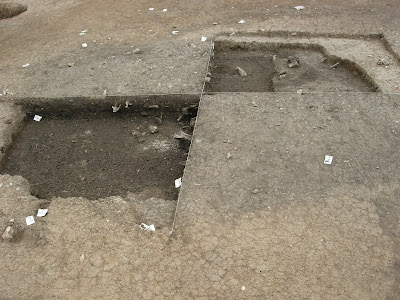 ....here you can see the SFB mid-excavation. The bits sticking out of the sections are pieces of animal bone but pottery and other exciting finds have come out of here; check the blog for more details. Anyhoo, I was assigned a funny shaped blob to investigate, with my eager assistant Sophie, and after a bit of a clean up and furtle we turned it into this.... 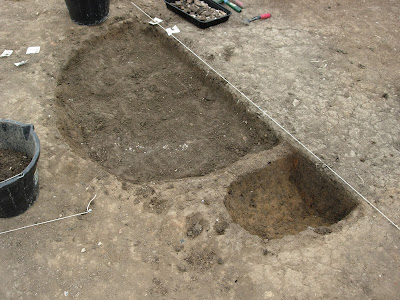 ....a pit and a smaller linear feature next to it. Both producing similar sorts of finds so possibly contemporary with each other. These are a bit later than the hall and are of an Anglo-Norman date (around the 12 century); there are a lot of these sorts of cesspits all over the site, some of them 1.8 meters deep! We go down further (Sophie is sat in our hole to the right and Rosemary is stood in her pit on the left).... 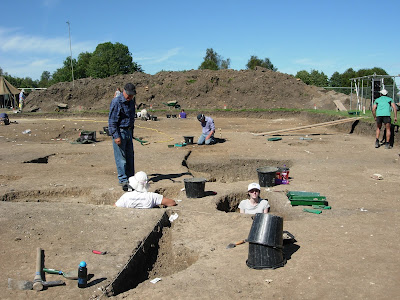 ....and pick up pot, shell, charcoal, daub...the usual rubbish they would have thrown in on top. Samples will be taken from this feature and processed by flotation. Flotation is a very simple concept, basically the sample is submerged and all the interesting bits - like seeds, grains, bones - float to the top and are collected. From this we can re-construct the diet of the people who used this cesspit and so far other pits are producing fish bones, along with the seeds and grains. It may sound a bit grim but these pits are 1000 years old!

And that's as far as we got in my brief visit to Lyminge. Sophie will continue following the cesspit down so good luck to her! Some of us were lucky enough to get a tour of the church and I helped on the Lyminge open day so will update you on those soon but I would just like to say thank you to the organisers, supervisors, and the people of Lyminge for letting me come and dig, and for being so welcoming!